While calling it an operating system is overstating the complexity involved dramatically, the fact remains that I have had a very productive week in that the two most convoluted portions of the PETI firmware is now in place - the two systems which manage the central game state object and decide what is drawn on the screen and when. Step on through and we’ll talk about how that was done, and the pitfalls I found along the way.

To the surprise of precisely nobody, the most complicated part of PETI was, is, and will likely always continue to be its graphical system, though calling it a graphical system is overstating its capabilities. PETI uses a text-based multi-font character system to divide the screen up into a series of lines of character-based text of certain widths based on which font is being used.

The original plan up until about noon on tuesday was to always use the same arrangement of lines - one each on the top and bottom of 8x12 text, and 6 in the middle using the larger 16x16 font.

However, when I started working on the display code I realized it would be fairly easy to do this completely differently, and so I implemented the scene system in such a way that all the following statements are true:

This means you can also do the following things without ever editing main.c again:

This was chiefly done by implementing three new display modes:

This part, as it turns out, was the easy part. 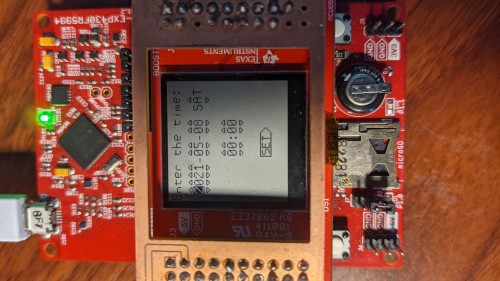 Another part of the code changes this week - which I glossed over up until now - was redesigning the time tracking completely to use the RTC_C peripheral. This exposes an accurate-to-the-second, adjusting-for-the-weird-rules-of-time clock that can be set to run constantly in the background and, to the best of my understanding, runs independantly of the system clock, meaning it won’t need to be corrected if I ever decide to raise the system clock nearer to the peak of what it can do.

This meant a couple of things - we don’t have to waste time counting the timer interrupts when the timer wakes us up once per second to do things, for example. It also meant I needed a way to set the RTC. In initial testing - and to set up the calendar - I passed in an arbitrary date and time, but it would be handy to have the user set the calendar. In fact, this was always an intended part of the boot process, and the game wouldn’t normally let you enter gameplay without a set time.

Turns out that this is actually also super easy. All that’s needed is a function to hold the glue logic, and glue logic that interrogates the various input registers, holds some numbers in memory, then dumps them into the RTC and spits you out to the game’s main scene - SCENEADDR_main_game.

With one complication - the RTC is expecting its arguments in Binary Coded Decimal (BCD) format. This can be confusing at first, but fortunately the DriverLib convenience library for the MSP430 Family exposes functions not just to manage the conversion but to do the conversion in hardware within the RTC peripheral itself, for whatever performance bump that’s worth. Once that’s sorted out it’s actually fairly simple to get a clean set of inputs.

This was implemented extremely quickly, which meant I got extremely cocky immediately afterward.

When I say I implemented the game state I’m being a little disengenous. While all the functions that you’ll see in the main.c file are defined, a lot of those functions have child functions that aren’t defined yet, commented out because they weren’t strictly needed for the tech demo. In essence, all you actually have are two functions: an initialize function that stands up the struct that holds the game state and another that updates it and some various global integers that are controlling things, which is called on every trip around the main loop.

The child functions that control a lot of the game functionality are missing - right now, all that exists is a cutout function that sets a special evolution time if the active stage happens to be the egg state, and the evolution detection logic doesn’t handle the evolution at all, but drops the user back into SCENEADDR_demo_mode when the egg would normally hatch. This was enough of the logic in one place to test the concept.

The scene described at main_game.c is going to be some of the most frequently-run code on the entire device, second only to the ISR for the TIMER_A interrupt and all of the functions called in the main loop. This is because it controls the drawing of the main game display, as well as managing state related to that, such as cursor position for the two main menu bars (also not yet implemented, because to implement them I would have to implement menus for them to go to).

This sounds very simple, and is, but pushed the limits of what I could do with my current understanding of C as a language, embarassingly enough.

There are two concepts important to understand about how animations are handled on the main_game screen:

This introduces a lot of complexity. For each of the six lines of text that describe the “playing field” of the game’s main screen, the function has to:

This complexity, while allowing a great amount of versatility (and eventually allowing us to make use of special metanimations without expanding the already bloated fonts, necessarily lead to some craziness just in getting compilation down.

Second Issue: Neither Arrays, nor Structs, nor Pointers Worked Inutitively

I have a far better understanding of it now, but initally I was running into massive problems even getting the metanimation and animation values /into/ the function that updates the text in that line. This came from a massive pile of bad pointer juggling, and it got so bad that I ended up asking for help on the mentoring channel of Clickspring’s Patron Discord (Patreon Link) and being taught the right way around to both constructing the arrays of structs that hold all of this data as well as getting my pointer situation sorted out. 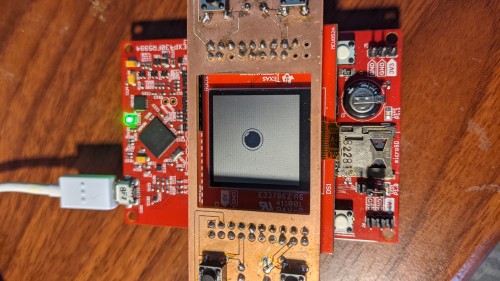 The issue turned out to be extremely simple and was noticed by XerTheSquirrel of SquirrelJME Fame (full disclosure; I am a maintainer on that org, though if you loo you’ll see I do no actual work on the JME) - I was dividing the character index by 8 and needed to be dividing by 16 - the width of the font, rather than the number of cells in the desired output. Oops!

This lead to two funny coincidences:

That sorted, we now have… a pulsing egg that actually works!

The Problem I Skipped: What do you mean, out of memory?

For legibility reasons, I’ve also skipped over a problem I ran into during the implmentation of main_game that had less to do with the coding of the functions themselves and more to do with how I was building the structures that hold permanent game state information like:

The summary: I forgot about a very important phrase: #PRAGMA PERSISTENT. The compiler expects this declaration before any symbol definition or assignment that you want to have be relatively static for the full operation of the device. Making this declaration tells the compiler that you will not be modifying (or at least not frequently modifying) the object and would you please put the silly thing in FRAM.

Because I did not include this pragma I could not get the code to fit onto the device and was tearing my hair out until I remembered running into the same issue when I was defining the splash screen bitmap, which exceeds the operating RAM of the device itself and therefore has to be read into the SPI bus very carefully when displaying it.

A lot, actually. Technically the active codebranch at the PETI repo has a version number instead of being POC-SOMEDATE, but the game is hardly pleasurable to play in its current state. Before I go any further with defining the systems that keep track of hunger, force evolution, play minigames, and so on, though, there is a very important task to do.

All of this stuff has to be documented, the codebase has to be linted and recommented, and I’ve gotta actually merge the changes into master.

Oh, and somewhere in there I need to put the breadboard-prototype of the back plane into practice, which I’ll probably do as a Tuesday night stream.

PETI is a major project intended to design and construct a virtual pet from Open Source Hardware and Software. If you would like to support the development of this, or any of the other projects I’m working on for Arcana Labs, and you wanted to show your support financially, your best avenue is via my Github Sponsors account or by making a one-time donation to Arcana Labs via Ko-Fi.com or through other avenues detailed here.